Find this article at:
go.ncsu.edu/readext?859517
— Written By Dominic Reisig 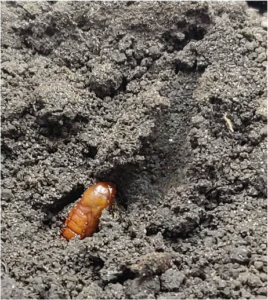 Corn earworm (also known as bollworm) is a major pest of corn, cotton, sorghum, and soybean. Monitoring has traditionally focused on the adults using light traps, and counts of worms (caterpillars) in the field. In North Carolina, corn earworm can produce four to five generations in a season and will survive the winter by suspending development in the soil. By the beginning of October, all corn earworm will enter the overwintering phase to survive cold temperatures. During overwintering, the insect will pupate in the soil until temperatures rise the following spring.

Although row crop producers focus on larval control, researchers have proposed targeting overwintering pupae to 1) reduce them as a source of insecticide-resistant worms in the upcoming season, 2) thwart their ability to migrate, and 3) target the population when abundance is low.

In Australia, an IPM tactic known as “pupae busting” is utilized to control the cotton bollworm, an insect closely related to the corn earworm. Pupae busting is the tillage of soil following cotton harvest to delay resistance to Bt crops. In the U.S., tillage was historically used to control corn earworm in cotton, among other reasons, but is no longer recommended due to necessary soil conservation efforts (no-till, in-row subsoiling, strip-till, and ridge-till). To understand the impacts of tillage on IPM, the relationship between soils, on-farm management, insect control, and crop productivity must be explored further.

As a graduate student, I focused on understanding how corn earworm pupation is impacted by soil. For those North Carolina growers interested in tillage, it is important to understand how deep these insects can pupate and how survival is different among soil types.

Soil conditions play a vital role in the successful development of insects like the corn earworm but have been understudied because the pupae are inaccessible. I found that over the winter, fewer pupae survived in clay soils, and pupae excavated from clay were shallower in depth. In addition, I observed that clay soils also reduced the emergence of adult moths and contributed to wing deformation that prevented flight. This may be one of the many reasons why corn earworm is less prevalent in the Piedmont compared to the Coastal Plain, although my experiments did not directly address this. 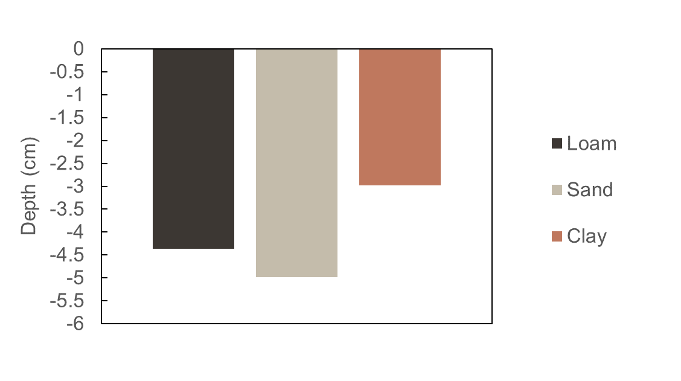 North Carolina cotton harvest during September through November means that a portion of worms feeding on this crop at the end of the season will enter overwintering depending on the harvest date in cotton fields. Based on my studies, Bt cotton in sand or loam soils in the southeastern U.S. may contribute more to insecticide resistance than Bt cotton grown in clay soils, since more survive in these types of soils. However, I urge caution with these results, since there is plenty of evidence suggesting that cotton is not a major contributor to corn earworm Bt resistance in the landscape. Field studies in collaboration with growers in this region are necessary to understand how Bt cotton is interacting with the overwintering survival of corn earworm to influence insecticide resistance.