Vineyards Facing an Insect Invasion May Turn to Aliens for Help

Find this article at:
go.ncsu.edu/readext?625139
— Written By Ryan Adams

Walking around a park near Allentown, Pa., I didn’t even notice the bugs at first. Then Heather Leach arrived. She’s an insect expert from Penn State University.

She pointed me toward the trees, and suddenly I realized they were everywhere: spotted lanternflies. An army of gray bugs, each one about an inch long, black spots on their wings, was climbing the trees’ trunks. They marched slowly along branches. They were sucking the trees’ sap, excreting some of it as sugary water that rained down on us in a gentle shower.

This is the latest great insect invasion to hit the United States. 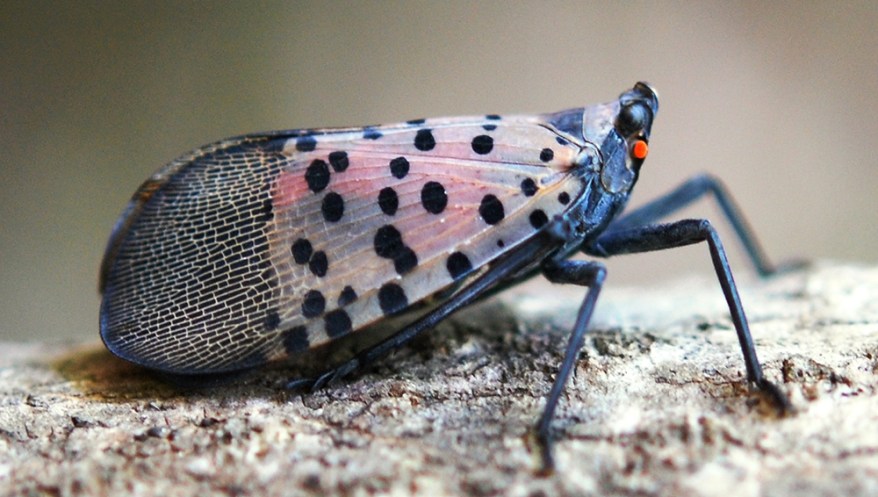 “They are kind of ugly, especially when there are thousands of them,” Leach says. “Poke at them and you’ll see how strong of a hopper they are; they just take off.” She demonstrates. The lanternflies jump so fast and so far, they’re just a blur in the air. It makes me laugh.

“Yeah, they can be entertaining,” Leach says. “You see a lot of kids playing with them, trying to stomp on them.”

The spotted lanternfly, Lycorma delicatula, first showed up in the United States five years ago, right here in Berks County, Pa. Nobody knows exactly how it got here. Most likely, some eggs hitched a ride across the Pacific on a shipping container.

Now there are hordes of them spreading across the state and beyond. Chances are, they’ll eventually reach most of the country. “It’s an insect that lays its eggs on anything, including things that get transported,” Leach tells me. “It hops on vehicles and can hold on” as you drive.

These insects don’t seem to have any natural enemies in the United States, but there are plenty of trees full of sap for them to drink. The lanternflies prefer a kind of tree that arrived from China many years ago, an invasive species called Tree of Heaven. But they also can feed on maples, oaks and dozens of other trees.

“They’ve got a buffet out here,” Leach says. “They can eat all of these plants, and they don’t have anything that’s taking them down. So they’re having a good time! They’re having a party, right?”

Penn State set up a hotline that people can call with lanternfly questions. It fields panicked calls from people with swarms of lanternflies on their houses, or their trees. Leach tells them not to freak out. These insects won’t bite or sting or carry disease. But they’re not a joke, either. They really can destroy things.