Insecticides in at least one area are not only failing to control mosquitoes, new research suggests, they’re actually allowing the bloodsucking pests to thrive—by killing off their predators.

The study, published this month in the journalOecologia, reveals a new wrinkle in how insecticides may be impacting ecosystems. Mosquitoes in the study area in Costa Rica have evolved resistance to common chemicals meant to kill them and other pests. The mosquitoes’ predators, meanwhile, have not kept pace with that evolution—and that has allowed the mosquito population to boom.

Edd Hammill, an ecologist at Utah State University and lead author of the study, first got an inkling that insecticides might not be having their intended effect while conducting research in orange plantations in northern Costa Rica. 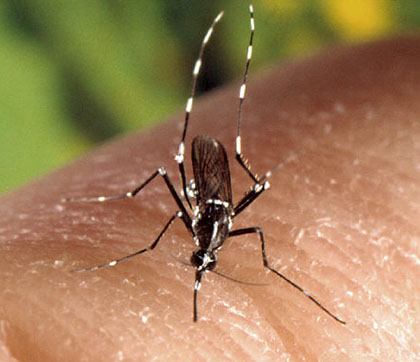 “We felt like we were getting a lot more mosquito bites in plantations than in pristine areas and started to wonder why,” Hammill says.

So he and his team surveyed where the mosquitoes were coming from: bromeliads, a group of plants found in warm parts of the Americas, often growing on tree branches. The water-filled spaces between their tightly overlapping leaves host a whole community of insect larvae, including mosquitoes of the species Wyeomyia abebela.

The team looked at bromeliads in plantations—some of which had been treated with insecticides for more than twenty years—and in untreated forests. The Costa Rican growers use dimethoate to treat their orange trees for plant lice, but it kills many other insect species too. In the U.S. it’s widely used on citrus, corn, and other crops.

Hammill’s team found that despite all the insecticide, the orange plantations were hosting twice as many mosquitoes as the pristine forests. But damselfly larvae—a major predator of larval mosquitoes—were conspicuously missing from the plantations.

When the researchers took the insects into the lab and exposed them to varying levels of dimethoate, they found that the plantation mosquitoes tolerated concentrations ten times higher than the forest mosquitoes. But the plantation damselflies had evolved no such resistance.

The resistant mosquitoes thus appear to have found a sweet spot: a nursery habitat for their young that is devoid of predatory damselflies. There, they flourish.