IPM Tips for Japanese Beetles in Soy and Corn

Find this article at:
go.ncsu.edu/readext?599818
— Written By Ryan Adams

Since its accidental arrival in New Jersey in 1916, the Japanese beetle (Popillia japonica) has successfully adapted to its new surroundings, expanding through all eastern U.S. states and crossing the Mississippi river.

More successful in the U.S. and Canada than in its home country (because of climate and natural predators), P. japonica has been eating (and thriving) more recently through more Midwestern states and Canadian provinces and is now poised to spread damage to the U.S. corn and soybean crop, centered in the upper Midwest. This poses significant economic issues for soy and corn farmers, since the area boasts the world’s largest production of both crops.

The Japanese beetle has taken well to the United States. The insect’s adult form is a strong flyer and can travel over large areas, and it feeds on as many as 300 host plants. Its larval form can burrow into turfgrass and other shallow roots, while the adult beetle can cause significant foliar damage. In a new guide published this month in the Journal of Integrated Pest Management, Hailey Shanovich, graduate student in entomology at the University of Minnesota, and colleagues at UM and Iowa State University trace the beetle’s current path and provide an overview of what to expect over the coming decades as the insect expands its territory. Climate models have begun to show that areas now planted with corn and soy are suitable for the beetle but have not been infested yet. 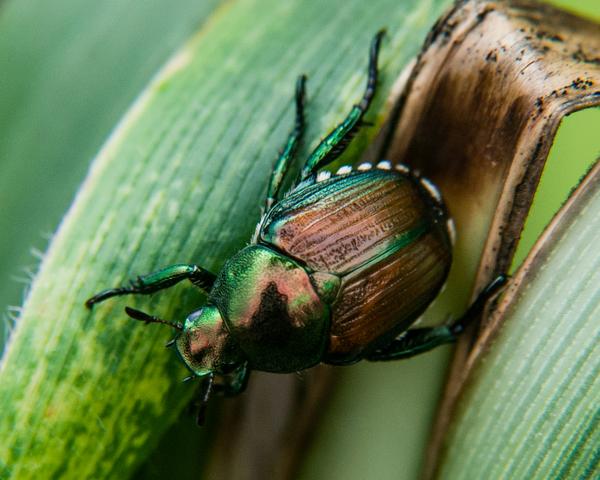 The Japanese beetle is a new arrival for corn and soy fields. “This pest has been in the Midwest for a couple decades but mostly in urban environments,” says Erin Hodgson, Ph.D., associate professor and extension entomologist at Iowa State University and senior author on the JIPM article. “These beetles are now more commonly found in field crops, like corn and soybean, in the Midwest, and we wanted to provide a resource for crop consultants and those working in agriculture.”

The Japanese beetle is a generalist herbivore, meaning it will feed on nearly any plant available, although it has shown some preference for certain plants. In addition, host-plant resistance has been found in soy and other plants that could play a role in fending off the pest. For corn, adults feed on corn leaves but cause more damage by clipping off corn silks, which interferes with pollination. For soy, defoliation is the chief concern, as the beetles feed on leaf tissue.

The first step for an integrated pest management approach, however, starts with scouting for adults in a field and estimating leaf damage to corn and soybean, Hodgson warns.

A good representative field sample is essential to determine potential beetle damage, since the insects can be found at higher numbers along the edges of a field. Scouting also is difficult because the adult beetle is highly mobile. For treatment, Hodgson and her team also recommended foliar insecticides. This need can vary between corn and soy.

For corn, Hodgson and colleagues suggest protecting silks during the first five silking days and using an insecticide if there are more than three beetles per ear, silks are less than a half inch, and pollination is less than 50 percent.

For soybean, they recommend trying to estimate whole-field defoliation (infestations can be concentrated) and sampling the entire plant, not just the top.