Find this article at:
go.ncsu.edu/readext?593840
— Written By Ryan Adams

In Mark Demuth’s research orchard in the shadow of the Blue Ridge Mountains, the peach tree twigs glow a soft red-brown under the strengthening late winter sun. The peaches are emerging from hibernation, he says, as he points out which of the stirring buds will open as leaves and which as blossoms come early April.

Until then, the trees must undertake their most perilous journey of the year. Growing fruit trees in Appalachia has always been a high-wire act as peaches, plums, apples and pears race to flower in early spring while dodging a killing frost. 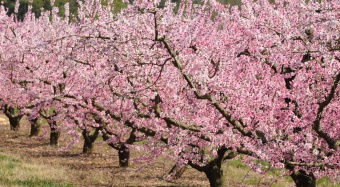 But researchers across the United States say the milder winters of a changing climate are inducing earlier flowering of temperate tree fruits, exposing the blooms and nascent fruit to increasingly erratic frosts, hail and other adverse weather.

The problem is not obvious to consumers, in part because a harvest collapse in one region can be masked by a bumper crop in another. But unless breeders can produce more climate-resilient varieties, fruit-growing regions of the United States will be seriously disrupted by future warming scenarios, scientists say.

Breeders are working to develop new varieties, said Katherine Jarvis-Shean, a University of California plant physiologist and farm adviser. But new trees typically take two decades of methodical breeding to create, exposing existing varieties to the vagaries of shifting winters and springs. “The consumer will begin to know it’s happening in the coming 10 to 20 years,” she said, and got a foretaste five years ago when the sweet cherry crop in California crashed after a winter that was too mild.

Even the problem-solvers are having problems. Last year, Demuth and his colleagues at the U.S. Agriculture Department’s Appalachian Fruit Research Station in Kearneysville, W.Va., were able to conduct the controlled pollination they needed to keep their breeding program going. However, in each of the preceding four years freezes killed virtually all the blossoms and brought years of hybridization work to a halt. As a backup, they moved some of their breeding stock to a commercial nursery in Adams County, Pa., where the season is later. The peach blossoms at both locations are poised to bloom on schedule, and Demuth and his colleagues are hoping for a frost-free April.