Raising a Stink for BMSB Research

Almost a decade after the first brown marmorated stink bug outbreak cost Mid-Atlantic apple growers millions, the pest is no longer inducing panic, thanks to advancements in targeted management for orchardists.

Now, researchers have moved toward new efforts to regain integrated pest management in the orchard ecosystems, with attract-and-kill strategies to minimize insecticide sprays and understand how best to use the biocontrol wasp that followed BMSB here from Asia. 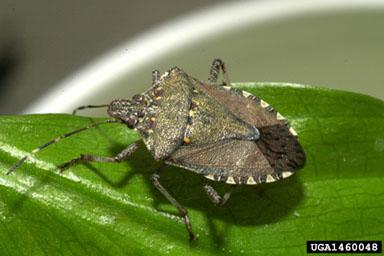 It took a massive effort by researchers across the U.S. to get a handle on the initial BMSB invaders.

“At first, we didn’t even know what to spray, so that was the first stage,” said Tracy Leskey, entomologist with the U.S. Department of Agriculture, who leads the region-wide research program for BMSB from the Agricultural Research Service Station in Kearneysville, West Virginia. “Now, we are learning about their biology, behavior, and ecology to manage them more sustainably, and the final stage is the biocontrol to manage them across the landscape.”

Growers in the region say they know how to manage the pest now, but are eager for new tools, such as attract-and-kill strategies and biocontrols, to keep the population low and prevent damaging outbreaks.

“Growers are not scared that stink bugs will surprise them, now that we understand them so much better and can use monitoring,” said Greg Krawczyk, entomologist at Pennsylvania State University’s Fruit Research and Extension Center in Adams County. “But we really messed up the whole integrated pest management system we had before.”

Secondary pests, such as woolly apple aphid, scales, mites, and aphids, boomed after natural-enemy populations were wiped out by the use of broad-spectrum chemistry, he said.

“Before the stink bugs, we used mating disruption, selective chemicals, and biological controls. Growers didn’t need to spray more than four times after bloom,” Krawczyk said. “Then BMSB happened and we went from four to 10, 12, 14 sprays.”

Now, nearly 10 years later, “the system is getting back toward normal,” and growers spray insecticides about six times a year, including twice for BMSB if needed, he said.