WASHINGTON — Honey bees aren’t the only pollinators of apple flowers: bumble bees, sweat bees, mason bees and many other species do, too—and the more the better, according to findings of a study recently published in the journal Science.

A Cornell University-led team that included Agricultural Research Service (ARS) scientists found that apple orchards with diverse bee species yield more, high-quality fruit than orchards with fewer, closely related bee species. However, that production benefit hinged on what type of landscapes the bees were flying in from beyond the orchard. For example, orchards surrounded by crop fields or other agricultural landscapes had 55 percent fewer bee species than orchards bordered by natural habitat areas (which provide the insects with shelter, nesting sites and additional sources of pollen and nectar).

The researchers attribute the reduced fruit quality to the apple flower’s reliance on a variety of pollination techniques and behaviors that a diverse bee community provides. Some species approach the flower from above while others do so from the side or at different times of day and frequencies—of all which rounds out proper seed production and fruit development. 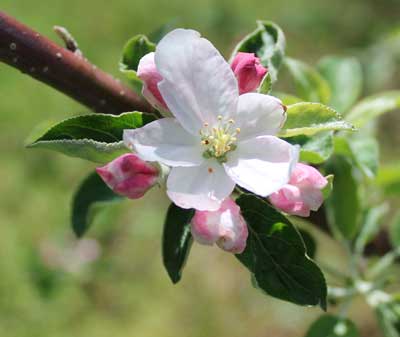 In their study, the researchers collected 10 years of survey data on 88 bee species from 27 New York State orchards planted to Golden Delicious and McIntosh apples. Using the survey data, they created a phylogeny, a tree-of-life diagram to visualize and compare the evolutionary branches of species that visited the orchards from different landscape areas.

A key observation was that orchards fare best when they have a diverse community of bees flying in from natural habitats versus agricultural or urban landscapes where only the toughest or most adaptable species can survive.

These few hardy bees, the researchers surmise, may share a limited bag of tricks pollination-wise, when what the apple flower really needs is the diverse “talents” of a species-rich community. However, if some species aren’t visiting an orchard because of unfavorable landscapes beyond it, then the flower suffers, producing fewer seed and poorer fruit quality.

More broadly, the researchers used the bees as a model organism to better understand the impact of changing land uses on the diversity of species that make up a community of organisms and, in turn, their delivery of “ecosystem services,” such as crop pollination, water filtration (by mussels, for example) or carrion scavenging (vulture feeding).

The findings caution against using species counts as the sole measure of success for conservation efforts. Instead, conservationists should combine the counts with an assessment of ecosystem services that the species deliver, notes Michael Branstetter, an entomologist who developed the phylogeny diagram at the ARS Pollinating Insect-Biology, Management, Systematics Research Unit in Logan, Utah.