Cover Crops That Take the Heat

Find this article at:
go.ncsu.edu/readext?592880
— Written By Ryan Adams

Plant Materials Centers (PMCs) in the Southeast are gathering data on different types of cover crops that landowners can use during the summer months.

We often think of cover crops as being planted after a cash crop is harvested in the fall. But, what if your cash crop is harvested in the spring not the fall? Or, you harvest your cash crop in July or August and still have months of temperatures rarely below 60 degrees? Fall planted cover crops are cool weather plants not suited to higher temperatures. The PMCs in the Southeastern US have producers that experience these situations, so we began to evaluate cover crops and varieties that grow well in warmer weather. Four years of evaluations were completed in 2018.

Sunn hemp and cowpea are widely recommended legumes for use as summer cover crops. Sunn hemp produces large amounts of top growth (biomass) in a short period of time. Tropic Sun, AU Golden and a common variety not stated (VNS) type of sunn hemp were compared. Tropic Sun and the common type produced the most biomass.

Unlike the upright growing sunn hemp, cowpea is vining. Chinese Red, Red Ripper, and Iron and Clay cowpeas were compared. All three did an excellent job of quickly covering the soil surface. Iron and Clay flowered later than the others and produced the most biomass. 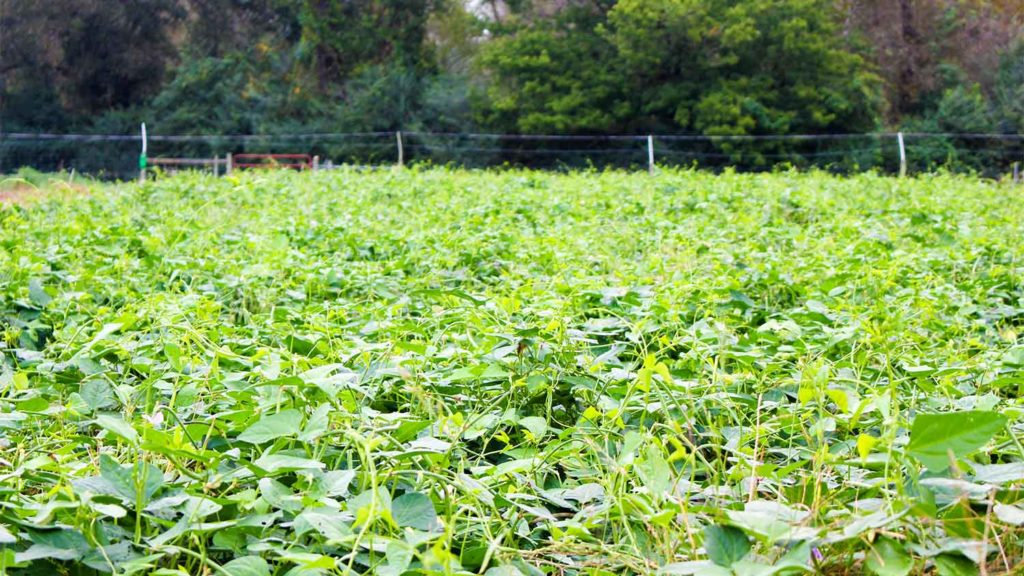 Two varieties of forage soybeans, Large Lad and Laredo were compared. Poor germination and slow growth resulted in less ground cover and biomass production than cowpeas or sunn hemp. Large Lad performed best at the Georgia PMC, but Laredo was better in Mississippi and Florida.

Partridge pea was evaluated because it is a native species. Comanche and Lark Selection varieties were evaluated. Seed dormancy resulted in poor stands. Comanche established better than Lark Selection, but ground cover and biomass production was poor.

The PMCs in Florida and Georgia tested Rongai, a variety of lablab. It is a vining legume that provided excellent ground coverage. At the Florida PMC lablab did not produce as much biomass as the cowpea varieties. It is a late-flowering variety and when planted in June had not produced flower buds by late September.

Several recommended grasses were tested as summer cover crops. A variety of sorghum-sudan called Honey Graze and an unnamed type of sterile sorghum were tested. These are both tall-growing, corn-like grasses that provided little early ground cover but produced a large amount of biomass when mature.

Several types of millets were included in the study. Browntop millet is recommended as a quick cover to prevent erosion. The unnamed type that we planted provided excellent early cover and produced a moderate to good amount of biomass. We planted two types of proso millet, a common white type and a variety called Dove developed by the Georgia PMC. The common variety was poorly adapted at all sites; it flowered and set seed in a few weeks, providing little ground cover or biomass. Dove provided good ground cover but produced less biomass than browntop millet. Japanese millet and the closely related billion-dollar grass are primarily planted as a wildlife food source but can also be used as a summer cover crop. Both the common Japanese millet and the billon-dollar grass, variety Chiwapa released by the Mississippi PMC, provided good to excellent ground cover and good biomass production. Chiwapa is later flowering and can therefore be terminated later than common Japanese millet.

Mexican teosinte is a close relative of corn that is not widely grown in the U.S.; however, it can produce dense stands. We planted two types, the variety Chapingo released by the Florida PMC and a common type from a local seed supplier. Early ground cover was poor for both, but ratings improved as the plants branched out. They both produced an excellent amount of biomass. One drawback to this species is its hard-seededness, which may lead to seed carryover and make it a weed problem in production fields.

For detailed information on the results of the summer cover crop evaluation study, refer to annual reports and research summaries from the FLPMC, the GAPMC and the MSPMC.