Blister Beetles of Hay and Forages in North Carolina

Find this article at:
go.ncsu.edu/readext?379668
— Written By Wes Watson and last updated by Carol Hicks 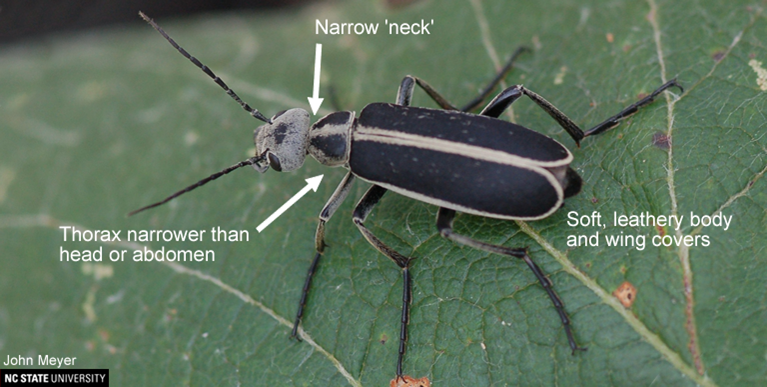 Introduction. Blister beetles are a group of insects associated with flowering plants. Although these insects vary significantly in color and markings, they are readily identified by having a thorax narrower than the head or abdomen, soft leathery wing covers and a narrow neck (Figure 1). Blister beetles get their common name from the blistering action of the chemical cantharidin, contained in the body fluids of the beetles at concentrations ranging from 1 – 5% (Blodgett et al. 1991, Capinera et al. 1985). The beetles use this substance as protection against predators, and when disturbed they squeeze cantharadin-containing fluid from their leg joints. This fluid can cause skin blistering on sensitive humans and animals (http://www.ent.iastate.edu/soybeaninsects/node/283). 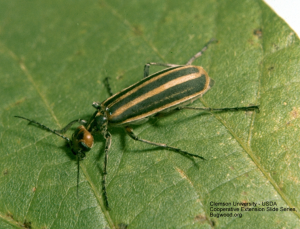 When the beetles are killed during harvest crushing or crimping then incorporated into hay they may cause blistering on the mouths of livestock, or if there are large numbers of beetles, illness or occasionally death from damage to the digestive tract (Schmitz 1989). This is particularly true when there are large numbers of beetles such as the striped blister beetle (Figure 2) which sometimes forms large mating aggregations that get incorporated into hay. Only the adult beetles are of concern for livestock owners.

Life Cycle. The striped blister beetle, Epicauta vittata, is widely distributed in the eastern US (Capinera 2003). Typically there are one or two generations per year depending on location. Members of the second generation are most likely to overwinter as 6th instars. In the deep-south (Florida) adult striped blister beetles may be active in the spring, April to May (Capinera 2003). In NC blister beetles usually have one generation per year because of the more northerly climate (http://ipm.ncsu.edu/AG271/soybeans/blister_beetle.html).

Adults are observed most frequently in mid to late summer, June to September, with peak occurrence in July. This seasonal occurrence is similar to that observed in Kansas (Blodgett and Higgins 1988). Adults are observed feeding on a variety of economically important plants in North Carolina, alfalfa, sweet clover, soybean, potato, tomato, melon, cotton and eggplant. After mating, females will deposit 4 to 6 egg masses (measuring 1.3-1.8 mm length) in the soil, each containing 50 to 300 eggs. The larvae hatch in about 10 to 24 days (Figure 3). Larvae are rarely seen because they are predators of a cryptic nature (Figure 4). Soon after hatching the larvae actively seek insect prey, grasshopper eggs in the soil, or wait in flowers to hitch a ride with an adult bee back to its nest where they feed on bee larvae and their food. Once they find their prey, they become relatively inactive, and larvae may pass through various developmental forms prior to pupating. 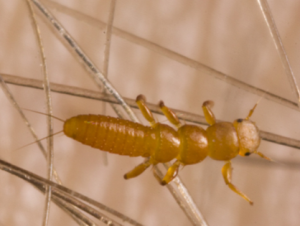 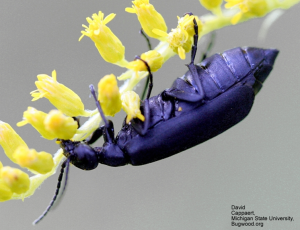 Blister beetle damage to birds and mammals. Accidental ingestion of blister beetles, blister beetle body parts or dried cantharidin fluids may be fatal to livestock. Horses are recognized as being most susceptible to cantharidin poisoning. However reports of cantharidin toxicosis in alpacas, emus, bustards, and humans suggest a broad range of susceptibility (Simpson et al. 2013, Sanchez-Barbudo et al. 2007, Plumlee 1999). 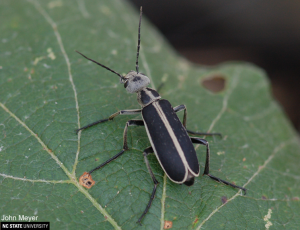 In horses symptoms of blister beetle ingestion include abdominal pain, colic, depression, sweating, rapid pulse and respiration followed by frequent urination, hematuria (bloody urine) and hypocalcemia and its associated side effects; abnormal gait and behavior (Plumlee 1999, Schumacher 2007). Poisoning in horses occurs after ingestion of alfalfa hay, or hay contaminated with weeds containing blister beetles, their body parts or secretions. Cantharidin levels vary from beetle to beetle, but as little of 0.5 and 1 milligram per kilogram of body weight may be lethal. The average cantharidin content of one striped blister beetle is 0.27 (0.04-0.68) mg per beetle (Blodgett et al. 1991) If you suspect cantharidin toxicosis, contact your veterinarian immediately for relevant treatment. 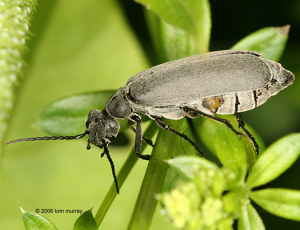 Prevention of blister beetle toxicosis. Blister beetles are widely distributed across the US and while no area is strictly immune to their presence, identifying high quality sources of hay will lessen the potential for cantharidin toxicosis. The first cutting of hay is less likely to contain beetles than later cuttings because of the seasonal activity of the beetles. Regionally, northern tier states will have first cutting significantly later in the year than southern states. Examining the hay for the presence of dead beetles should be routine and if contaminated discarded. Become familiar with blister beetles and how to readily identify them in the hay or the field. Harvest alfalfa before it flowers and avoid crimping if possible to allow beetles to escape. Other helpful recommendations can be found at the University of Georgia Extension publication C917 Buntin and Handcock 2010 <http://extension.uga.edu/publications/detail.cfm?number=C917#Seen.> 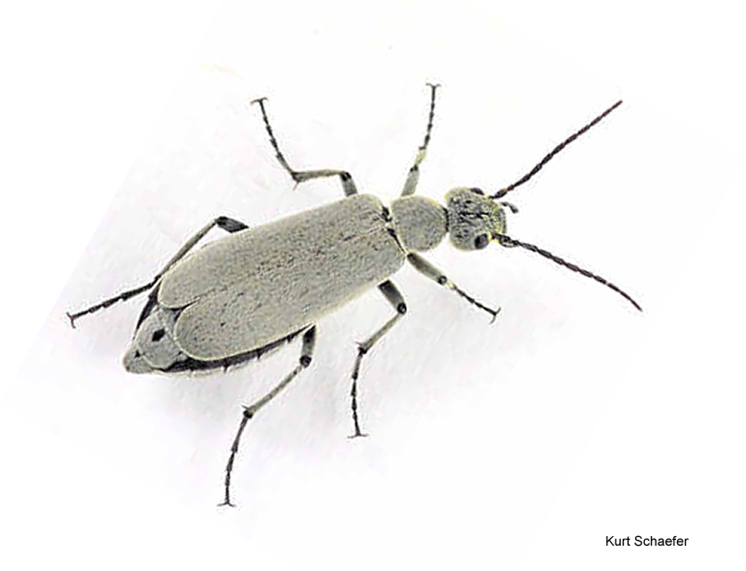