Find this article at:
go.ncsu.edu/readext?543977
— Written By Mike Munster

Scenario: In an arborvitae planting you find dead needles, either individually or in groups, mixed in with green needles on the same branch. Examination with a hand lens shows that some of the affected needles appear to be hollowed out.

You may first suspect a leaf miner, and in fact arborvitae can suffer attack by the tiny caterpillars of the arborvitae leafminer, Argyresthia thuiella. Often there will be a small hole at the tip of the affected set of needles and/or a caterpillar inside. At the NC State University PDIC, we’ve diagnosed this three times this century, most recently in February of 2016, on Emerald Green and Green Giant arborvitae from Rockingham County.

In late June of this year similar symptoms were seen on an arborvitae sample from Mitchell County; however, inside the needles we could find no sign of insects, silk, frass, or shed skins. What’s more, the holes on the sides of the needles seemed to have been neatly plugged. In some needles the epidermis was broken in a clean semicircle, as if opened by a microscopic can opener. Often a fringe of black fungal material was visible at the edge of the resulting flap of tissue.

It turns out that these unusual symptoms were the result of infection by the ascomyete fungus Didymascella thujina (formerly Keithia thujina). The disease is known as cedar leaf blight (a.k.a. Keithia blight) and historically has been more prevalent in the warm and moist growing regions of the Pacific Northwest than the Southeast. The pathogen is slow to develop, and infection would have occurred in the late summer/early fall of last year. Apart from the hollowing out of the needles, needle drop may occur later in the season. The “plugs” in the holes appear to be the remains of the fungal fruiting body. While we want these problems to be on your radar, keep in mind that arborvitae in North Carolina are much more likely to suffer from Armillaria or Phytophthora root rots, poor planting, spider mites, and scales than to either of these pests.

If the leaf miner is found, scouting for the adult moths can be done in May and June. For diagnostic assistance, contact your County Cooperative Extension Agent or the NC State University Plant Disease and Insect Clinic. 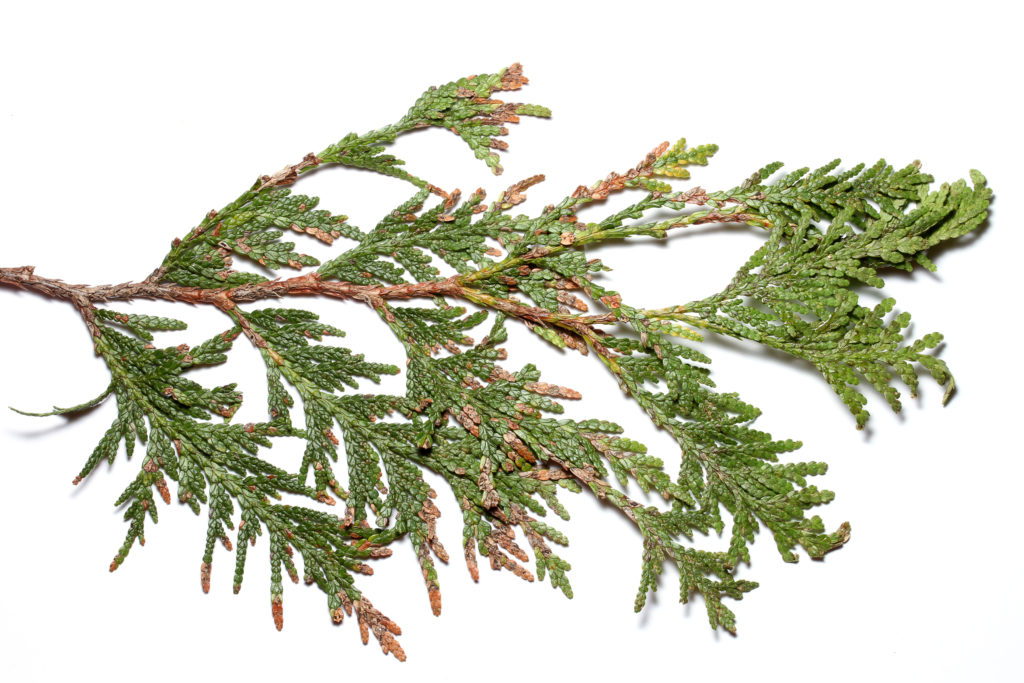 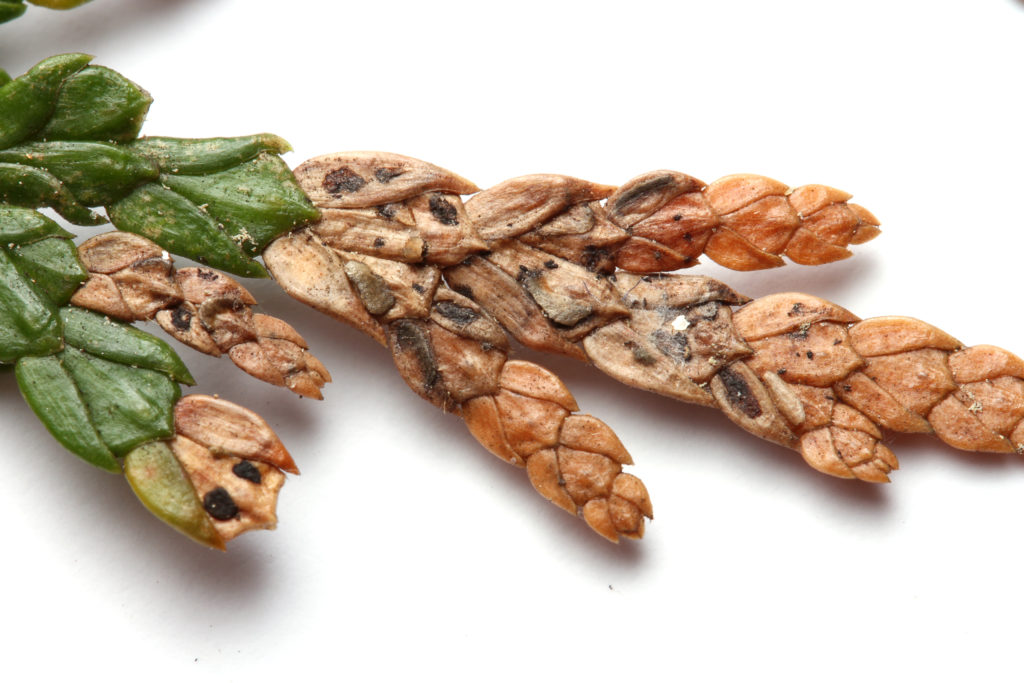 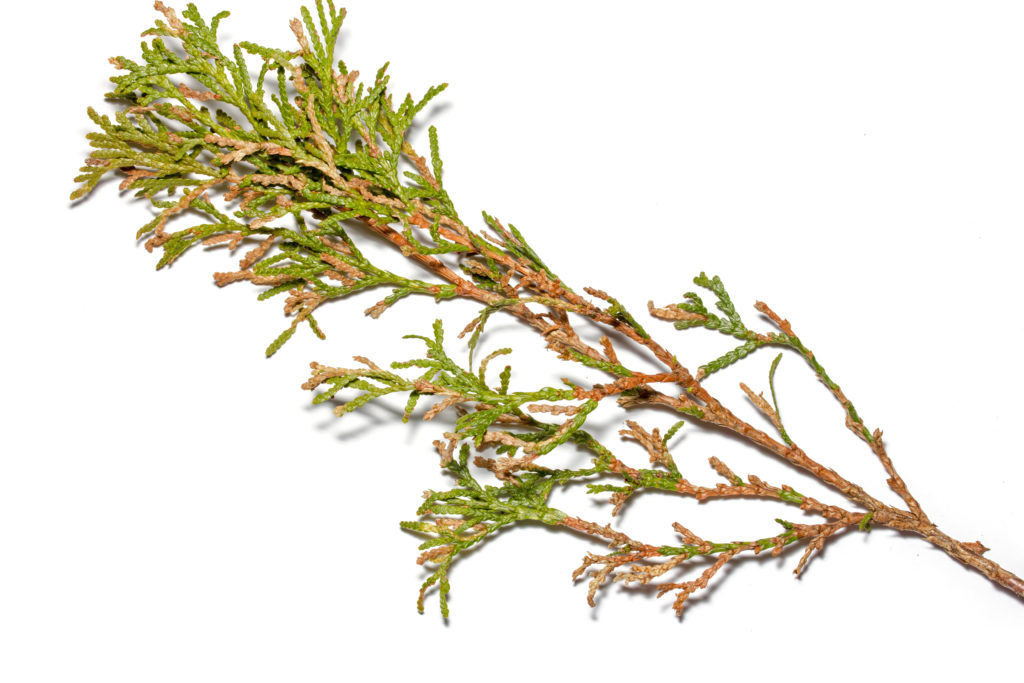 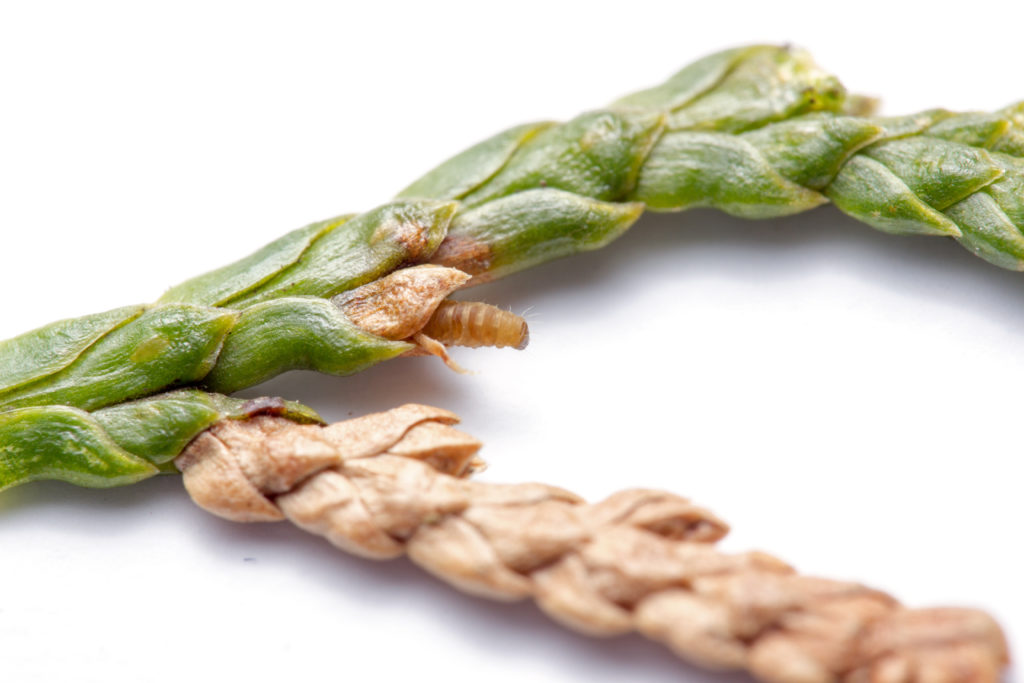 Arborvitae leaf miner larva exposed at the bottom of its mine, after most of the brown needles were removed. Photo: Matt Bertone