Find this article at:
go.ncsu.edu/readext?382823
— Written By wmshipma and last updated by Carol Hicks 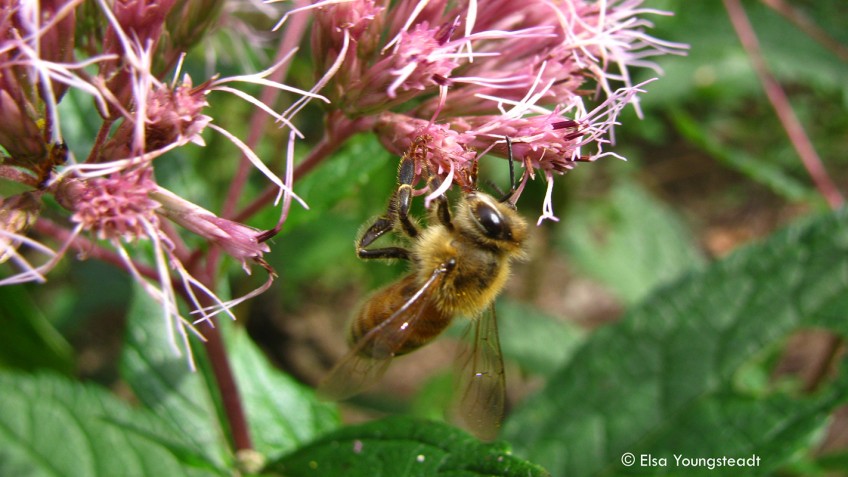 “We wanted to determine if the increased temperatures and impervious surface areas associated with urban environments have an effect on the number of pathogens bees are exposed to, and to the bees’ immune responses,” says Steve Frank, an associate professor of entomology at NC State and co-author of a paper on the work.

“We also wanted to look at both managed honey bee colonies and ‘wild’ ones, to see if that made a difference – and it did,” says David Tarpy, a professor of entomology at NC State and corresponding author on the paper.

Working with volunteers, the researchers identified 15 feral colonies, living in trees or buildings without human management, and 24 colonies managed by beekeepers in urban, suburban, and rural areas within an hour’s drive of Raleigh, N.C. The researchers collected worker bees from all of the colonies, and analyzed them to assess the bees’ immune responses and their overall “pathogen pressure.” Pathogen pressure accounts for both the types of pathogen species present and the abundance of those pathogens.

The research team found that colonies closer to urban areas and those managed by bee keepers had higher pathogen pressure.

“Overall, we found that the probability of worker [bee] survival in laboratory experiments declined three-fold in bees collected from urban environments, as compared to those collected in rural environments,” Frank says.

However, the researchers also found that immune response was not affected by urbanization.

“Since immune response is the same across environments, we think the higher pathogen pressure in urban areas is due to increased rates of transmission,” Tarpy says. “This might be because bee colonies have fewer feeding sites to choose from in urban areas, so they are interacting with more bees from other colonies. It may also be caused by higher temperatures in urban areas affecting pathogen viability or transmission somehow.”

“Feral bees expressed some immune genes at nearly twice the levels of managed bees following an immune challenge,” Frank says. The finding suggests that further study of feral bee colonies may give researchers insights that could improve honey bee management.

“Honey bees are important pollinators and play a significant role in our ecosystems and our economy,” Tarpy says. “This work is really only a starting point. Now that we know what’s happening, the next step is to begin work on understanding why it is happening and if the same negative effects of urbanization are hurting solitary, native bee species that are presumably more sensitive to their local environment.”

The paper, “Urbanization Increases Pathogen Pressure on Feral and Managed Honey Bees,” was published Nov. 4 in the journal PLOS ONE. The co-lead authors of the paper are Elsa Youngsteadt, an entomology research associate at NC State, and Holden Appler, a former graduate student at NC State. The paper was co-authored by Margarita López-Uribe, a postdoctoral researcher at NC State.

Abstract: Given the role of infectious disease in global pollinator decline, there is a need to understand factors that shape pathogen susceptibility and transmission in bees. Here we ask how urbanization affects the immune response and pathogen load of feral and managed colonies of honey bees (Apis mellifera Linnaeus), the predominant economically important pollinator worldwide. Using quantitative real-time PCR, we measured expression of 4 immune genes and relative abundance of 10 honey bee pathogens. We also measured worker survival in a laboratory bioassay. We found that pathogen pressure on honey bees increased with urbanization and management, and the probability of worker survival declined 3-fold along our urbanization gradient. The effect of management on pathogens appears to be mediated by immunity, with feral bees expressing immune genes at nearly twice the levels of managed bees following an immune challenge. The effect of urbanization, however, was not linked with immunity; instead, urbanization may favor viability and transmission of some disease agents. Feral colonies, with lower disease burdens and stronger immune responses, may illuminate ways to improve honey bee management. The previously unexamined effects of urbanization on honey-bee disease are concerning, suggesting that urban areas may favor problematic diseases of pollinators.