Find this article at:
go.ncsu.edu/readext?363828
— Written By Jim Walgenbach and last updated by Ryan Adams 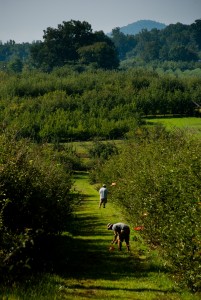 We are currently in a period when there are relatively few insect pests that pose a threat to apples. Codling moth populations in lower elevation orchards, and, as discussed in last week’s pest news post, emergence of first generation  plum curculio may be a concern in orchards that experienced significant damage earlier in the season.

In higher elevation orchards in such as Henderson County, only about 1200 DD have accumulated since biofix, so in this area we are still at least 7 to 10 days from the beginning of moth emergence. In lower elevation orchards in the foothills and piedmont (e.g., Alexander, Wilkes, Cleveland, Lincoln and Polk Counties), codling moth degree-day accumulations range from about 1500 to 1650, which is equivalent to emergence of about 50 to 75% of second generation moths. Close attention should be paid to pheromone trap captures and an assessment of damage caused by first generation larvae.

In general, codling moth pressure has been fairly low this year, so in most situations a single insecticide application is provide sufficient control, but all decisions should be based on moth activity as measured by pheromone traps.

European Red Mite:  European red mite still remains a threat in orchards that have not experienced problems as of yet. Typically, if ERM have not developed to problematic levels by the first week of July, populations will remain low for the remainder of the year in most instances – assuming that pyrethroid insecticides harmful to natural enemies are not used.