Find this article at:
go.ncsu.edu/readext?366585
— Written By Jim Walgenbach and last updated by Ryan Adams 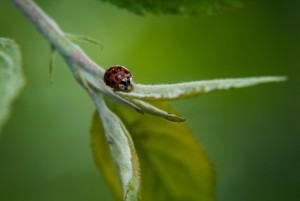 A beneficial insect in the orchard, a lady beetle

Codling Moth:  In Henderson County and other elevations above 2000 ft, codling moth degree-day accumulations since biofix average about 1500. Although this timing coincides with the mid-flight period of the second generation, and pheromone trap captures did increase slightly this past week, overall, codling moth populations have been low this year. Last week we surveyed numerous orchards in Henderson County for insect damage, and codling moth damage was extremely low. In most mating disruption orchards it is unlikely that insecticides will be needed against second generation codling moth, and in most other orchards it is unlikely that more than one application will be necessary. However, pest control decisions should be based on pheromone trap captures in individual orchards.

In lower elevations, such as Cleveland and Lincoln County, degree-day accumulations since biofix average about 2100, which indicates that the end of second generation flight is nearing. If pheromone trap captures have been low in recent weeks, it would be very unusual for populations to increase over the next several weeks.

Oriental Fruit Moth:  Despite the fact that very little OFM damage has been observed up to this point in time, pheromone trap captures did increase by about 4-fold this past week – although overall numbers remain fairly low, averaging about 8 moths/trap. As mentioned in recent weeks, OFM populations often gradually increase from late July through September, and insecticidal control can be difficult in September when harvest is underway. Also remember that mating disruption is highly effective in managing OFM, so this is rarely a problem in orchards using dual pheromone dispensers (codling moth and OFM) for mating disruption. In those orchards not using mating disruption, one or two applications of sprayable pheromone have worked very well in past years. The first application should be made when pheromone trap captures increase to >10 moths per trap per week, and a second application 3 to 4 weeks later.

As with codling moth, OFM populations can vary considerably among orchards, and there is no substitute for the use of pheromone traps to detect potentially damaging populations.

Apple Maggot:  Historically, apple maggot flight usually begins in mid to late July and remains a potential threat through early August. We have kairomone-baited red spheres in several abandoned orchards in Henderson County, but as of yet we have not consistently captured any flies.

Brown Marmorated Stink Bug:  First generation adults are becoming more abundant throughout the region. These are individuals that developed from eggs laid by overwintering adults in May and June. Typically, emergence begins at about 450 DD (°C) from 13 May, and peak emergence occurs between 600-700 (°C). As of Monday (July 13) DD accumulations in Henderson County were 435, so first generation adults should begin to emerge this week. Off the mountain where temperatures are considerably warmer, we are near 600 DD – as of July 13, 560 had accumulated in Cleveland County. First generation adults tend to readily move from the edge of wooded habitats into orchards and other fields, so scouting for BMSB will be important over the next several weeks. Based on pheromone trap captures thus far, populations appear to be much higher in the piedmont compared to most mountain areas.